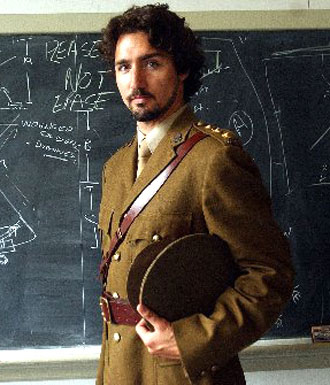 Well it seems I'm a little late to the party. Justin Trudeau announced his bid for the Liberal leadership last week, and now here I am a week later commenting on it. But like I said before, focusing on the Liberal leadership race is a disgusting habit, akin to shooting heroin. So perhaps it was best that I let the news sink in for a week, instead of devoting my scarce time and energy to denouncing a parasitic politician that, to be quite honest, I could care less about. I sat down to write my Trudeau post a couple times, but I never felt that motivated. I enjoyed writing about Tommy Douglas, Canadian Idealism and Jack Layton much more than any attempt at Justin Trudeau. Maybe later, when he wins and develops more concrete opinions, I'll jump on the bandwagon and rip apart his statist ramblings. You can be sure I'll be all over the 2015* election when it's Harper vs. Mulcair vs. Trudeau (assuming he wins, which is less of an assumption than a predetermined reality).

So for now, allow a couple of my favourite alternative media outlets to summarize my thoughts:


So Justin could have laid low, made something of himself, been a businessman, an academic, maybe cut his teeth in something really gritty and realist and day-to-day, but not at all glamourous, like, I don't know, Quebec municipal politics or something.  He had all the resources to become an erudite scholar, a continent hopping CEO, even a feared and respected backroom political operator.  This is all speculation, but my point is that he had every opportunity to define himself in such a way that people would say "Here's a successful guy who happens to be Trudeau's son" rather than the "Oh god,..." rolling of the eyes he currently inspires.

Why does he inspire such sentiments?  Isn't a few years teaching high school, and another few years of looking pretty in the House of Commons at $157,000 a year, representing a riding he doesn't even live in good enough to lead a national party and one of the most developed countries in the world?  Am I being unfair to Mr. Trudeau, who has sternly admonished all those who critique his thin and unimpressive resume as unjustly comparing him to his larger-than-life father?

Yes, I am being unfair.  Because politics is a game of images, of impressions, of theatre and of manipulation.  Barack Obama and Mitt Romney and Stephen Harper and even Vladimir Putin are, inasmuch as being real humans with all of the same earthly trappings as the rest of us, definitions of a series of assumptions and values and aspirations that are then packaged into their respective personas and fed back to the nebulous, shifting, uncritical "electorate".  Three of my four references are successful politicians because they and their operators have succeeded in this process.  Progressive and terse pragmatist, rational and incremental conservative, unifying and ruthless strongman.  Can you match the persona to the politician and then tell me who you can match the fourth "waffling and out-of touch tax evader" persona to (ok, that could be Putin too, but that's another column), and then tell me why the predictions for the November U.S. Presidential Election are looking so dim for him?  Because the only chance of winning elections (or in the case of Russia, being legitimately accepted as the only realistic authority figure) is to succeed in this propaganda battle.  It has nothing to do with beliefs, substance, policies or actions.  It's what adjectives that ultimately imply trustworthiness and confidence come to be associated with the person.  That is why Justin is doomed.

Other than a steady stream of vague and saccharine platitudes about youth (the youth are the future of Canada...hmm, when weren't they?) and the environment (I have a vision for a greener Canada...oh, I thought Canadians were actually all hoping for a dirtier Canada - please enlighten us), Mr. Trudeau has yet to make any statements that demonstrate significant knowledge of economics, our three-layered democratic system and its institutions, international affairs, Canadian regional specificities, or laws he would like to amend or pass.  You can find many M.P.s in the house across all parties, including in his own party, with much deeper knowledge in these areas.

Mr Trudeau, on the other hand, has mostly made an impression on me by saying that marijuana should not be decriminalized because of his mother's past drug use, that the environment minister and former Global TV anchor Peter Kent is a "piece of shit", and that Quebec should separate if Stephen Harper continues to be Prime Minister of Canada.

In other words, these facts would lead to believe that as of right now, Mr Trudeau, if he is not the complete idiot that the first position reveals him to be, is a bit of a loudmouth and a flake.  A person we probably wouldn't even be listening to if he wasn't his father's son, which he is so quick to remind us we are not supposed to primarily define him as.  Do you see the problem with the image and the definition here?


Thanks, Thorny Rose. Couldn't have said it better myself.

And then there's "Justin Trudeau's Interesting Inner Circle" by Terry Wilson of the Canadian Awareness Network,

Ted Johnson was Pierre Elliot Trudeau’s Executive Assistant. He has attended at least one Bilderberg group meeting (1983) and served as Power Corporations vice-president, general counsel and secretary. While with Power Corp. it was Johnson who handled the damage control when the corporation was linked directly to the food for oil scandal in the 1990′s. (former Power Corp president Maurice Strong was also heavily implicated in the scandal)

Ted Johnson seems to be one of the globalists background players in Canada. One of those guys in the shadows, that plays a key role in the direction that our country has been going for the last few decades.

Gerald Butts is the current President and CEO, WWF-Canada. His biography on their website states:

“Gerald is President and CEO of WWF-Canada, the country’s largest environmental organization. WWF focuses its efforts and global resources on tackling our most significant conservation challenges. This includes visionary projects focused on climate change, oceans, freshwater and the health of habitat and species across Canada and around the world.

Prior to joining WWF, Gerald was Principal Secretary to Ontario Premier Dalton McGuinty where he worked directly with the Premier, Cabinet and Public Service to develop, implement and communicate the government’s agenda. He was intimately involved in all of the government’s significant environmental initiatives, from the Greenbelt and Boreal Conservation plan to the coal phase-out and toxic reduction strategy. ” Continue Reading
As some of you may know. The WWF was founded by Sir Julian Huxley, who was also the founder of the Eugenics society. The WWF and many other similar organizations are basically offshoots of the eugenics society. This becomes even more evident when you look at more of the people involved with it.

Prince Bernhard, of the Netherlands, served as the first president of the fund from 1962-1976. also founded the Bilderberg group.

Prince Philip president of the WWF from 1981-1996. Prince Philip has repeatedly stated: “In the event that I am reincarnated, I would like to return as a deadly virus, in order to contribute something to solve overpopulation”.

The environmental initiatives he was involved with in Ontario come straight out of the text of agenda 21. The greenbelt initiative (like all agenda 21 programs) looks great on the surface. But is being used to create a buffer zone around major metropolitan area’s like the GTA. Making it impossible for these cities to grow outwards. Creating the environmental “barrier” for the future mega cities.

To view the greenbelt maps Click Here
As I stated in the article from yesterday. Be very wary of this wolf in sheep’s clothing! The main stream media is pushing Justin down the throats of Canadians without giving any of the concrete facts that surrounds the situation (big surprise). Stay diligent, do your own research, and together we can stop this agenda!


I'm sure the power elites would love nothing more than to replay the Bush-Obama drama in a Canadian context. Example: by 2015, Harper is so unpopular that Trudeau is presented as the political messiah. Canadians fall for hook, line, and sinker. Hopefully people aren't that naive; regardless, it's unlikely that the Grits would make such an easy comeback.

Either way, Agenda 21 is a serious issue. Perhaps in the future I'll post about that instead of some 40-year-old nobody with a famous last name.