Opt Out of Health Care 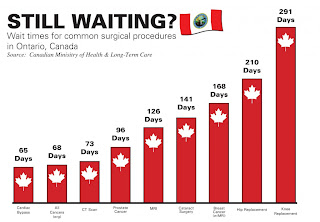 It's National Medicare Week! Did you know that? Neither did I. Apparently this a week where Canadians use “Facebook, Twitter and blogs to pass along links to articles about health issues, share community health resources and encourage people to email Prime Minister Stephen Harper to speak up in defense of Canada's universal health-care system.” These Canadians range from health-care professionals, labour unions, other powerful lobbyist groups and ordinary Canadians volunteering their time and effort for the cause.

As for any real discussions on Canadian health-care the free market approach is an uphill battle. But eventually economic reality will step in and we will a dine a free lunch no more.


However until that time comes, all I'm asking for is two-tier. You can have your government run health-care but let me pay for a doctor. We can discuss taxes. Personally I think all taxes should be voluntary, so naturally I would opt out of such a system. The loss of revenue from my income would be off set by having one less person reliant on medicare... or would it? I honestly don't know. The economics of government enterprises don't make much sense. They're just bureaucracies. The issue isn't so much economics as it is ethics. Isn't it morally wrong to force a fellow Canadian into a deteriorating system? Don't we have a free society where individuals have personal choice?

If you want it, keep your government mandated health-care but let me opt out.
Posted by Caleb983 at 3:53 AM