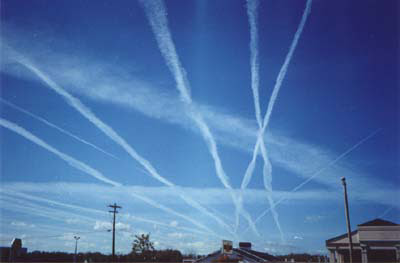 Unlike a lot of the chemtrail information out there, I'm going to try as be as neutral as possible; providing both sides of the argument to inspire some critical thinking. Part of my philosophy is: Don't believe everything you read, but read everything. Come to your own conclusions.

Despite the negative connotation, a conspiracy is just way of looking at an event as if there were an underlying motive. The State present their view, intellectuals or journalists outside the State apparatus offer another view. This is the alternative view on jet exhaust: airplane contrails that persist and expand are actually “chemtrails” that contain (usually) aluminum, barium and strontium. Spraying chemtrails is useful for weather manipulation as the chemicals form into clouds. Reasons for doing this may include: a world dependent on GMO crops, depopulation or a solution to climate change, a process known as geoengineering.

First, let's deal with the claim that normal contrails dissipate and therefore persistent trails are in fact chemtrails. Apparently this chemtrail phenomenon started in 1996-1997, so presumably we shouldn't find persistent contrails prior to. This is not the case, however. Contrailscience.com has some done some great research on this.

In this 1981 book entitled A Field Guide to the Atmosphere, contrails are described as:

“Sometimes [contrails] are ephemeral and dissipate as quickly as they form; other times they persist and grow wide enough to cover a substantial portion of the sky with a sheet of cirrostratus“

Cirrostratus being a type of cloud. Then there are these pictures from 1969 and 1975. 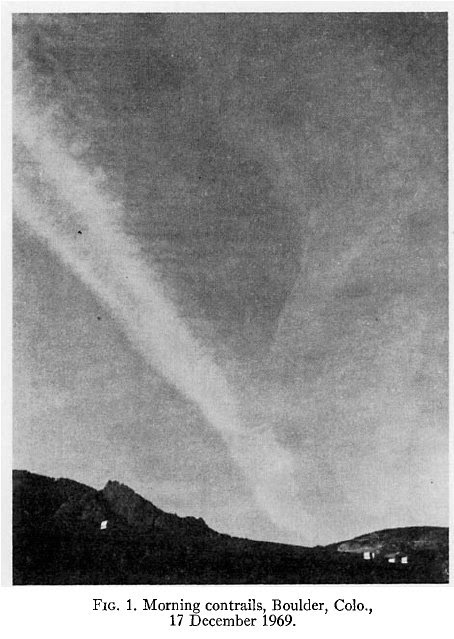 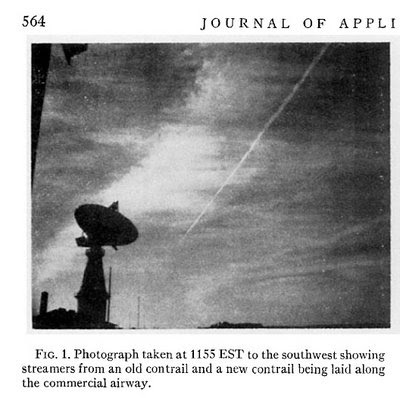 From the website, the author is an amateur pilot:


Aircraft contrails begin to streak the normally bright Arizona sky at dawn. Through the day, as air traffic peaks, these contrails gradually merge into and almost solid interlaced sheet of cirrus cloud – an artificial cirrus cloud that is frequently as much as 500 meters deep.

One of the earliest reference to contrails covering the sky is from the Mansfield News Journal, August 11, 1957, Page 29:


“Within the past few years, the weather bureau has begun to report the trails as actual cloud layers when there are sufficient trails to cover a portion of the sky.”

Here’s a description from 1955:
http://news.google.com/newspapers?id=SosSAAAAIBAJ&sjid=pvYDAAAAIBAJ&pg=851,1486793 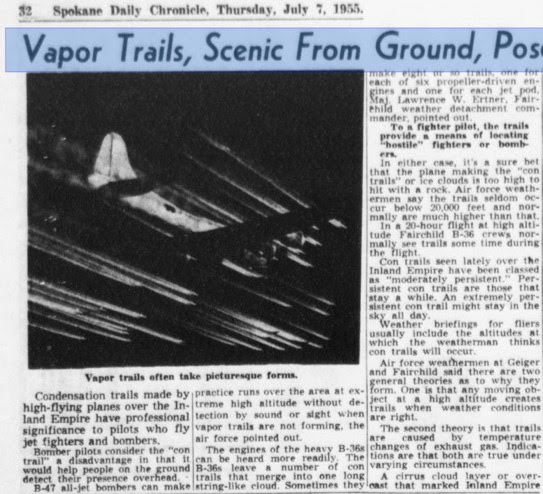 But even earlier, and with a perfect description of what “chemtrail” theorist claim cannot happen comes this account from 1944:
The News, Frederick, MD, March 7, 1944

Below is the entire top of the page of that newspaper, in case you want to look it up. And from the book “Flight To Arras” by Antoine de Saint Exupery, written in 1942 about a military mission in 1940:


The German on the ground knows us by the pearly white scarf which every plane flying at high altitude trails behind like a bridal veil. The disturbance created by our meteoric flight crystallizes the watery vapor in the atmosphere. We unwind behind us a cirrus of icicles. If the atmospheric conditions are favorable to the formation of clouds, our wake will thicken bit by bit and become an evening cloud over the countryside.

There is also this YouTube video from 1938, filmed in Nazi Germany that shows a persistent contrail, or chemtrail at 1:29.

So are all persistent contrails actually chemtrails? It would seem to indicate that they are not, unless the people behind this have been testing this out since World War 2. A possible scenario given that the Nazis had no problem doing medical experiments on Jewish people, let alone spraying an entire population. Given all their science and technology that was inherited by the Military Industrial Complex, it's possible that chemtrails are an old Nazi depopulation method.

Of course, this is by no means a definite conclusion. Persistent contrails don't rule out chemtrails, but the evidence indicates that not all persistent contrails are in fact chemtrails. Obviously, more research is needed on this subject. One way of going about is is using atmospheric temperature testing known as the Appleman Chart. I'll link you over to the Club Conspiracy forums where a user by the name stompk has detailed his findings in the first three posts. How accurate the Appleman Chart actually is and stompk's analysis of the information will have to be decided by the reader.

Whether or not these contrails are water vapor or chemicals, it's hard to dispute the fact that these things create clouds and influence local weather conditions. Which brings us to our next point: weather modification.

Contrails have been blamed for changing local ground temperatures, a global dimming some of called it. It's easy to see why, in Toronto there are over 65 airlines with over 500 flights a day coming in and out of the city. This video shows how much global air traffic there really is. Even if only a fraction of them leave a persistent contrail that expands into a cloud, the impact on the weather (and possibly human health) is noticeable. 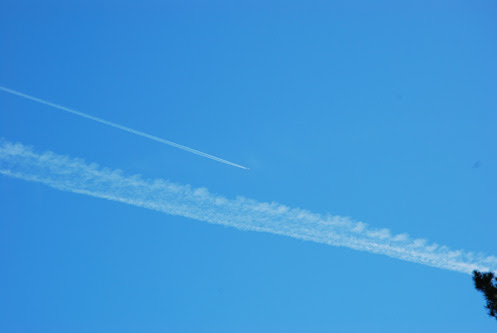 The effect contrails have on the climate was well-documented in the days following September 11th 2001, when virtually all air traffic was non-existent. Scientist studied the few Military-approved airplanes that were allowed to fly and came to conclusions about the environmental impacts of contrails. Of course, by 2001, if the conspiracy is indeed true, the chemtrail program had been in effect for at least four years.

Chemtrail or not, these things influence climate. Whether or not the Military Industrial Complex uses artificial clouds to influence weather (perhaps causing droughts in enemy territory) is a conclusion you will have to come to yourself. It has been admitted, however, that this process (known as cloud-seeding) is being undertaken for “peaceful purposes” by companies such as North American Weather Consultants, Weather Modification Incorporated, Weather Enhancement Technologies International, and Seeding Operations and Atmospheric Research (SOAR) in Canada, the United States and virtually the entire planet. 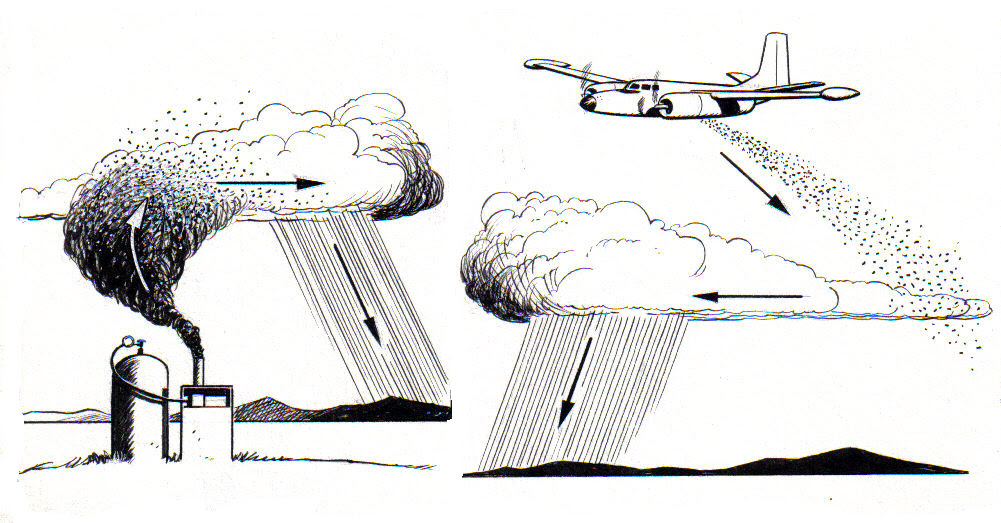 The question then becomes if the term chemtrail is just a buzzword for cloud-seeding, and if the cloud-seeding program has greatly expanded without consent of the public, or with regard to human health effects.

Purposeful weather modification companies use a variety of particles and gases that are apparently safe and only cause precipitation. This can be done by boats, airplanes, ground generators and, presumably, drones. Just because it doesn't look like cloud-seeding doesn't mean it isn't. So if a large amount of persistent contrails come from cloud-seeding drones or unbeknownst pilots with cloud-seeding airplanes – what exactly is being sprayed on us?

To my knowledge there has never been a pilot who has flown through these trails to collect samples and analyze them for certain elements. Until that happens the reasoning behind the before-mentioned elements come from studying soil samples, assuming the chemicals (particularly aluminum) fall to Earth and affect soil ph. This makes it harder for crops to grow, and would most likely have unwanted health effects on both humans and animals.

So are there record amounts of aluminum found in soil? Yes and no. It's not quite as black and white as some make it seem, but there are certainly raised eyebrows among some farmers about the changes in soil ph. It might not be conclusive evidence for a mass spraying, but something has been affecting the soil in the past few decades, perhaps in the same mysterious vein as collapsed bee colonies or increases in cancer.

The Canadian Homlestead website has a detailed section on chemtrails with soil samples from their property. Elsewhere, other interested individuals have documented levels of aluminum and barium far above regulatory standards.

If this practice of aerosol cloud-seeding and soil pollution is actually happening, who would be doing it and why?

A favourite target is Monsanto, a U.S.-based multinational agricultural biotechnology corporation. They could benefit from studying high alkalinity and acidity in the soil. As more aluminum is dumped in the air, the soil gradually increases the inability to grow anything and therefore becomes completely dependent on GMO seeds. At an uncertain point in the future, when the science of artificial seeds reigns supreme, it won't matter that nothing will grow in North America because the entire globe will be shaped by biotechnology. Imagine the Sahara desert as a giant tropical paradise, or the Arctic as an extension of the Boreal Forest. With the the advancement of GMO and weather modification technologies anything is possible. Humans could use central planning to shape the entire planet.

Is this the thought process of the Monsanto people?

Who knows. There are some entanglements with the State however, and that's never a good idea.

Of course, if you believe in the standard New World Order theory, the motives behind chemtrails have to do with the vision of the Monsanto people and the top 1% of the wealthy, most of whom are related to Rothschild and Rockefeller families. Their ultimate goal is massive depopulation where the remaining populace will be enslaved into a society like 1984 and Brave New World. As the Chinese aren't used to freedom and North Americans are, it would seem that we're first in line for the global genocide. Chemtrails are, presumably, just another gradual but deliberate attempt to murder over 300 million people without them knowing about it.

A less conspiratorial theory is that climate change has grown out of hand and these “chemtrails” are actually geoengineering projects involved with modifying the weather to avert global catastrophe. As most man-made climate science has been debunked, there leaves little reason for the implication of these projects other than inefficient bureaucracies being surprisingly effective. 20 years ago global warming became a problem, 10 years ago it became apparent reducing emissions wasn't going to work, in the present we're (more or less secretly) geoengineering the planet to solve climate change. All this because scientists had an incentive to make a living on State grants and the State responded to their findings.


In all three scenarios, the problem arises from the State.

If chemtrails are true, then they are the brainchild of either evil Statists or insane CEO's. In both situations, the State is the trigger. If these GMO or weather modification corporations operated without the State they wouldn't be corporations to begin with. Nor would they have the resources to embark on a project like this.

If these trails are simply air-traffic clouds that change local weather conditions, they should be studied – without the State – for unintended consequences. If found harmless an individual could still decide that he or she wants to live without these man-made clouds and thus move to a region unauthorized for air traffic. An insurance company providing a no-contrail view of the sky would have an incentive to make sure airlines aren't sending their planes over this community. If what the airlines charge for this service outweighs the pool of money the insurance company receives from selling their premiums, then the insurance company will raise its prices to accommodate demand. Likewise, if the no-contrail community is hundreds of miles away from any air traffic the airlines will charge less than if the community were in a large city. Depending on where the community is, the insurance company may risk not paying the airlines for this service at all, confident that airplanes will never fly over this isolated community. In this case the insurance company can charge something for nothing or the individual can cease paying. Regardless of how people go about it, the solution won't come from the government.

Whatever your position on chemtrails or contrails – our enemy is still the State.
Posted by Caleb983 at 11:36 AM