The Libertarian Revolution — Brought to You By The Illuminati 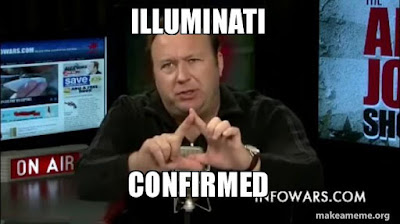 The Illuminati have gold. The libertarians have gold.

I rest my case.

The Illuminati are giving the libertarians the go-ahead for the new new world order. The post-Soviet plan by the corporate-state elite has failed.

That is, it is failing. Right before our eyes, every day. As we march toward all-around statism, the economy will collapse and so people must either revolt or starve to death.

A successful revolution would look like this: libertarians have the gold necessary to rebuild society.

The Marxian academia and youth, the government apologists and politicians — they are all broke. They will have no influence in the rebuilding of society.

There is already a commercial class that makes up their own rules. The middle-class will accept this and start forming their own rules. It will be a return to fluid, multiple legal systems like it has been for most of Western civilization.

Entrepreneurs will provide law and order and social services for everybody. Government tax receipts will be worthless, their services will be inept and their labour will return to the private sector.

Gold will be money again, with silver also returning for small-scale transactions. Initially, libertarian-owned gold will buy up acres of land and capital, finding ways to put Americans back to work and thus finally winning the intellectual battle.

The nation-state will cease to exist by its own incompetence. It won’t go without a fight, but the centralization of gold as a currency limits government spending power. Their reach will only go so far.

Other nations will adopt the return to gold, and American libertarians will successfully reshape the country into anarcho-capitalism, triggering government reformation in all the Western states.

But why would the Illuminati need to promote the libertarians?

Simple, they have a long-term view of things. They know government intervention eventually fails, that there is no post-scarcity fully robotic world without the need of humans. The only means of prolonging life and reaching for the stars is to keep the population in the billions and the middle class producing and innovating.

Alex Jones is an inside job.

Since they practically own the planet, hanging onto power means directing revolutions and shaping world events on a long-term scale.

Governments are petty and only see short-term gains. They won’t abandon their socialism, but economic reality will demand it. The families behind the banks know this.

In the struggle between socialism and capitalism, capitalism always wins. Always.

The Illuminati understand how the world works, they take this coming adjustment period very seriously.

Reintroducing gold is a dangerous step, but necessary. An entrepreneurial class to compete with the crony-capitalists will ensure order is maintained while the goals of the Illuminati remain in sight.

The Illuminati, of course, worship dark energy and connect with dark matter. They are evil incarnate, with a love of the senses and material pleasures.

The libertarian doesn’t ask for spiritual values or question religion — it is purely a political philosophy, one that would indicate untold prosperity for the human race.

But also one that, if implemented now, will serve the Illuminati’s ends by further detaching us from Jesus Christ and fulfilling the prophecy as foretold in the Book of Revelation.

Oh, and for those popular Christian libertarians, the Tom Woods, Jeff Tucker, and Lew Rockwell variety? — they are all Catholics, i.e. Jesuits.

And the Illuminati, through the Jesuits, run the world.

Libertarianism is an inside job.
Posted by Caleb983 at 6:47 PM