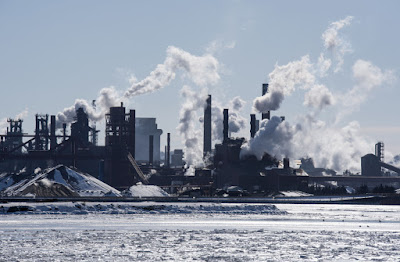 Congratulations Doug Ford. As premier of Ontario, you've been able to eliminate cap and trade.

Imagine if Wynne had implemented carbon taxes (surprised she hadn't) do you think Ford would hang onto it? Cap and trade is one thing, but a carbon tax? Why would the PCs give up on a tax? Best to cater to their base, calm them down, it's okay Progressive Conservatives of Ontario, a carbon tax is not a hill to die on.

But why not? Death and taxes are the norms. Something's gotta give. What about this social contract? I don't think it's sufficient. I've never seen this document. A parade of government documents I've been compelled to sign numerous times under the watchful eyes of the state have all been predicated on this mysterious birth document... okay, enough of this.

If you can't beat 'em, join 'em. The Queen. Appointed by God herself, or himself, or whatever. There probably is no god.

But that doesn't mean we must lose our imagination. Say the Earth is the centre of the universe. Consciousness the manifestation of the cosmos. We experience things through time so everything looks the way it does, but we're still stardust. We look and feel like evolved apes on a spinning planet, but what about all the dark matter and energy?

That's us, butt-tard. We're hiding in plain sight. No wonder we can't see us, it'd be like turning around to see the back of our own head.

We are the bang big and we are the universe as it exists now, through the lens of evolved primates. It's all about perspective.

But back on point -- Doug Ford. Cap and trade. Climate change. Yes, if conservatives don't find a hill to die on soon, they will forever be on the verge of becoming irrelevant. The left has principles, what does the right have?

Here we get back to the Queen and our imagination. We've also got nukes, computers, the internet, there's a weird volcano thing in Yellowstone, and all that carbon we've released into the atmosphere. Makes buying land in the Northwest Territoires a good investment.

But human ingenuity will figure things out, and that's where the right comes in to keep our taxes low and remind everyone that business is good. Small, medium, big or super large, all business operates peacefully when the conditions for law and private property are met.

That's the hill to die on. The Libertarians can keep them in check by saying "Taxation is theft," but for a genuine Conservative today, the best hill to die on...is...  well. Sorry fellas, it's still radical.

Money is a commodity, not a policy tool of government. Separation of money and state are good starting points for Western civilization. If we can figure that shit out, we might get somewhere better.

Climate change? It's real despite the politicization of the topic. In fact, anthropogenic global warming was one of the first victims of this over-politicization of every topic imaginable under the sun. This is what happens in communist and overly socialist countries. Everything becomes political. Fixing a toaster becomes a matter for the state.

The problem in the West is all these issues have become political and nation-wide instead of isolated to family, friends, and communities where applicable. (I'm not just talking small towns, but a larger network of neighbors and coworkers in a city.)

So now we're getting somewhere on cap and trade and carbon pricing. But before going further, a brief pause to explain what cap and trade is.

Since industry inevitably releases carbon and other pollutants, the government has taken upon itself to create a sort of "market" of credits and debts, using carbon output as the general measurement of value or, er, uh.. disvalue?

Remember when state and church were separate but rivaled for supremacy? I'm talking about the Middle Ages. From 1100 AD and on or so. If there's any justification for the assertion that the West predicates itself on Judeo-Christian beliefs and traditions, it's our belief and understanding in a metaphysical thing called the Rule of Law.

And thus we return to the Queen. And God. And atheism and imagination. What is the alternative to cap and trade? And why such these random tangents about all these different topics?

It's connected maannnn!!! And so, we must return to our imagination if we're going to make sense of this all.

Here is a suggestion: the conservatives find a hill to die on, I suggest the separation of money and state.

I'm not saying don't collect taxes. But having government bills floating around, issued by the central bank, where deliberating policy is in secret, this has got to be one of the dumbest ideas imaginable. Granted, it's not straight-up communism, but eventually, the game gets there.

The logic of human action Mises figured out is only "debunked" by philosophy and free will and human action and agency... consciousness itself. An area the realist scientific/materialist philosophy cannot account for.

So give up on this game of monopoly and remember that gold and silver are the best moneys we've figured out so far.  There are a lot of smarter people out there who can figure out what exactly governments "should do" to make this transition easy and painless.

But we might not have time. The laws of nature keep working whether we want them to or not. Left-leaning skeptic sites say the national debt is no problem since we've always had one. But this ignores every example in history. There are no examples of it ever working long-term.

The rise and fall of civilizations happen for a bunch of reasons but economy is one. An economy is the use of scarce resources. This matters a whole lot more now than it did in Roman times. We're using resources in a much more delicate way. And our paper money system simply can't work in the long-run. It corrupts too easily. When you can print money, the temptation is always there.

And by printing money you add water to milk.

You dilute the economy by undermining purchasing power. In a true capitalist society, our earnings are supposed to increase over time, not fall. The amount of gold and silver more or less stay the same, but their purchasing power goes further. My gram of gold might get me a haircut, a dinner for two, a video game, and a book or two depending on where I shop. Maybe it will buy more. We'll never know. At least not right now.

Excuse the length of this post, but I feel it's necessary to fully flesh out what exactly Doug Ford's PCs should be doing without cap and trade.

English common law already accounts for pollution since it existed in primitive forms during the Middle and Modern Ages. Industrialization disregarded traditional rules in the name of progress. No one had any idea of what they were doing. Things were just getting better. The long-term consequences have only recently begun to sink in. That's about 200 years. Not bad for a bunch of apes. I'm confident we can build carbon capture machines and eventually terraform the planet as we see fit. Then we can do the same to Mars and maybe build a base on the Moon. And what about Venus? It sure looks like hell, but couldn't we eventually terraform that planet too? And what about space hotels?!

The solution to climate change isn't taxes and imposing green technologies in a top-down "private-public partnership" fascist manner. It isn't going to come from government fiat. It can't. It's impossible and silly to think the government can plan its way out of this. They created it by undermining our centuries-old common law.

But of course, this brings us back to the Queen. Our imagination. We know she's not appointed by God. There probably is no god. Our English common law evolved out of a fear of heaven and hell. Of sin and redemption. Judgment.

We can use those narratives and dispense with the rest. We can even borrow from neuroscience and assume free will is an illusion. That, while a sociopathic killer needs locking up somehow, the idea is his consciousness, that which is introspection, only justifies his behaviour in his own mind. The rest of us do this with non-murdery things. We've evolved stardust that acts in the world. Our analog "I", our introspection and idea of self, is an illusion.

We act and make up reasons for it later. So we must use our imagination a bit and think of a way the Queen is still relevant.

Am I a freeman on the land? I feel like one. I don't accept the idea of the Monarch nor do I particularly like democracy. I don't think much of these government birth certificates and the social contract that follows, but I don't fuck with the taxman. I play ball so long as I'm protected in the same way one is "protected" by the mob.

"But isn't that a terrible, negative view of society?"

No, it's an honest liberal assessment of the state. I'm skeptical of it. I know we can't live without it. I'm a bit romantic in the right-leaning sense (okay, maybe a lot). I really like Murray Rothbard, but I know Nozick got him with the fact that everything leads back to a state.

Rothbard's economics, based on Mises, is still relevant. Government intervention in the market ain't gonna work. TANSTAAFL. And Rothbard's anarcho-capitalism system is a technical masterpiece. But would it work?

If we could all truly understand anarcho-capitalism and transition our society to it peacefully, we wouldn't need to. We could just do the nightwatchman state of classical liberalism. So there you have it conservatives.

You've eliminated cap and trade. Now what? I've figured it out for you. It's been a long rant, but I feel we covered some solid ground here. Just remember the main points.


Governments are like controlled forest fires. They keep the whole forest from burning down. I don't know who the hell we should put in charge of that but I believe it begins with education.

Which we'll have to get to next time.