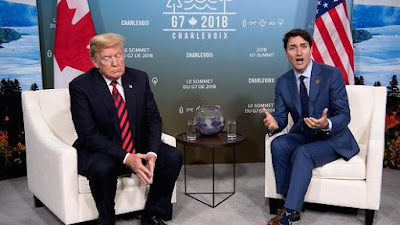 Amazon is free trade. If I sell something to an American through a platform like Amazon and there are no extra fees or taxes from the government because I am a Canadian trading with an American, then we have free trade.

The regulatory legalism of NAFTA is a far cry from a natural progression of liberal values. Somewhere in the 19th or 20th century, liberal ideas unglued and merged with untested theories of social democracy and socialism.

So let's break down what Trump's tariffs mean in this world where central banks and governments "float" fiat currencies against one another.


Forget Adam Smith and The Wealth of Nations. Adam Smith popularized the labour theory of value. As far as I'm concerned, the man was a goddamn communist.

Let's instead focus on Ricardo's Law of Association and Mises' deductive study of human action. While not "scientific" in the materialist sense of the word, up until the 20th century, this method of knowledge was at least respected for what it was: sound logic from sound axioms.

Free trade works. It is a specialization of labour. The head of every household never wants to pay more than he needs to. He has a family to raise.

The insurance underwriter cares for none of this. She buys from the liquor store carrying her favourite beer. Her purchase helps employ individuals and maintain the supply chain.

When categorized as an entire "industry," individuals in the supply chain may argue for their own self-interests. Normally, this isn't an issue, since free trade promotes harmonious competition. Like in sports.

Politics captures the violent element of humanity. When self-interests are employed through the legislature, interests come at the expense of others.

It is precisely the same problem Henry Hazlitt was dealing with during his lifetime. And here we are still making the same mistakes, Trump notwithstanding.

The issue isn't tariffs per se. Considering only the immediate effects on special groups while neglecting to consider the long-term effects on the everyone is the problem.

It's always this problem.

I never liked American politics with or without Donald Trump, but I must say, from a pure entertainment standpoint, he is by far the best president that country has ever had. When I hear his voice on the radio, it's pure gold.

So, let's take this from the Canadian perspective first.

They're saying Trump is wrong. Supply management is not the same as a tariff. Supply management protects Canadians and dairy workers. Maxime Bernier challenged this view and was subsequently robbed the leadership of the federal Conservative Party for it. Later, he was kicked out of the Conservative shadow caucus for again challenging this idea.

The Canadian dairy lobby believes it will be a national disaster if the Canadian government ends supply management, effectively allowing American dairy producers to compete in the Canadian marketplace.

Just like how the telecommunication lobby believes it will be a "national disaster" if the Canadian government ends their cartel, allowing American internet and phone providers to compete in the Canadian market.

Americans can probably sell Canadians milk at $3.20 per gallon.

That's right. Are your panties in a bunch because of something Trump said/did? Are you watching too much network news? This "issue" comes down to about $1.30 worth of savings in milk.

Personally, I don't even drink the stuff. I prefer we talk about the Bank of Canada or something, but I guess I can get to that in another post. The Fed is hiking rates.

Anyway, Canada's dairy cartel doesn't consist of a roundtable of evil conspirators. They're normal people like you and me thinking of the thousands of people they employ, and the consumers whose spending, in turn, creates their employment.

Throw them out of work and you create unemployment. The issue is simple. Supply management wins.

Also, American milk is gross. Hormones and stuff. GMO. Puss. "I'm not going to argue with you!"

Never mind that you can still freely choose, as a consumer, to drink the same milk you always have.

And that not all American milk is mass produced. I'm sure there are local Wisconsin and Minnesota dairy farmers willing to sell organic, even raw, milk to the people of Manitoba and Northern Ontario.

Why is some invisible line guarded by real people standing in the way?

Because Canada's dairy lobby looks after their own interests at the expense of everyone else. There is simply no other way to use the government apparatus.

And what of Canadians interested in becoming dairy producers themselves? Supply management is a barrier to entry if there ever was one.

Supply management is not a tariff. It is worse.

If all goes as planned, Trump will help bring American steel jobs back.

The cost of Canadian steel to the American buyer may be so high that Americans find it profitable to enter the steel business in whatever fashion (use your imagination here, it's not just "steelworkers" but entrepreneurs starting new factories, existing corporations branching off into new developments and capital investments, insurance companies finding new clients with these new steel producers, janitorial services for the expanding factories, construction companies to build the new infrastructure, and other positive externalities in the community such as steelworkers shopping at local vendors).

It all looks so real. But American consumers would be subsidizing this industry. Every piece of steel and aluminum produced in the US would be at the expense of the purchasing power of consumers.

But there would no net addition to the country's overall wealth.

This is a crucial distinction.

It's hard to see these consequences. Trump's tariffs may bring back American jobs and this would be seen, it would be visible.

Perhaps then, just as a Trump presidency is making us rethink our nuclear weapon policy, perhaps Trump's tariffs will remind people of the "unseen" in economics.

Trump's results would be palpable. But the reduction in other industries, the loss of jobs somewhere else, would not be so easily noticed. Even statisticians are at a loss to know precisely what the incidence of the loss of other jobs would be. Call it the uncertainty principle of human action.

The loss is spread over too many people and obscured further by inflation. But, the loss exists. The wealth created from Trump's tariffs would be an optical illusion.

Labour productivity is in fact reduced since they won't have to compete with us Canadians anymore.

Yet... the fallacies coming from Trump's tiny lips are the same ones I hear coming out of Canadians fat mouths. And this is whether they politically identify with the Orange Dingbat or not.

This idea that "we don't need no Americans, we got all the resources here in Canada, let's just build our manufacturing base here!"

And how do you suppose we do that? By discouraging exports through tariffs? How about the outright nationalization of crude oil, cars, gold, refined petroleum oils, automotive parts and accessories, petroleum gas, sawn and chipped wood, aluminum, and turbojets industries?

We could always raise the price of manufactured goods in Canada, demand Canadian entrepreneurs step up to the plate...

But how could we be expected to do this in a regime with punitive taxation and a costly and unnecessary government bureaucracy? Where business decisions are increasingly and fundamentally the will of bureaucratic enforcement instead of the entrepreneur?

Canadians, if they don't want to sound like Trump cut from a different cloth, should consider looking at the long-run effects on everyone as a whole instead of the immediate effects on a single group of people.

And about Canada's dairy cartel?

It's true -- they will be hurt if supply management ends. As some people have developed specialized skills surrounding supply management, they may suffer permanently. That is, until they learn a new skill. If they can. Perhaps they're in their 50s or 60s and without sufficient savings.

Such is life. It's unfair. Once upon a time, mutual aid societies like the Lions Club or the Odd Fellows played a much larger role in civic life. Like with everything else, the state has made this unaffordable. It has unintentionally fostered dependence on itself. It has crowded out private investment, including social capital.

We are now at the end of the experiment in social democracy and socialism. It may last another 20 years. But this is the end.

Fair or unfair, facts don't lie. It is a fallacy to say supply management or tariffs "provide employment," or "protect consumers" or any of that nonsense.

So far as our standard of living is concerned, it does the complete opposite.

We are poorer with tariffs and we are poorer with supply management. We're probably better off with NAFTA then without it, but, ultimately, we need to focus on the Federal Reserve if we're ever going to get anywhere.
Posted by Caleb983 at 10:11 PM