The Trite of Trump, Trudeau and Tariffs 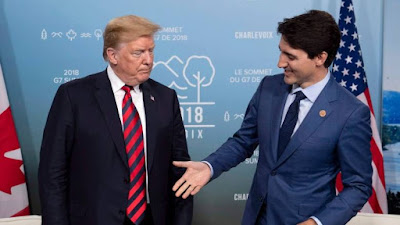 The problem with blogging about Canadian politics is that you have to be a political news junkie.

Once upon a time that was me. Especially when I first started getting into "Austrian" economics. But, as time went on, I wanted to know whether praxeology was really telling me something true about the world.

So, I got into philosophy, particularly epistemology. It's a journey that is far from completion. But there's been one nasty side effect.

The daily nitty-gritty of politics and current events has never been so annoying.

So when all the countries get together for the G7, when Trump has a "meltdown," none of this means anything to me. And it shouldn't to you either.

Nevertheless, I'm sure there's some lesson behind Trump's advisors referring to Trudeau's "special place in hell."


There's a recent episode of the Tom Woods Show I recommend where he reads and comments on a piece by a progressive leftist writing about Trump. Spoiler alert: there's a lot of agreement between the lefty & Tom.

"The Real Revolution Has Nothing To Do With Donald Trump," is a great read and more or less summarizes my thoughts.

That said, no one is going to change Trump's mind on tariffs. He's just going have to destroy his own economy until Americans kick him out in 2020. I just hope his tariffs don't take the heat for what the Fed has created, but that's a long-shot.

Anyway, the relationship between Canada and the US has been deteriorating long before Trump took office. Granted, he has poured a ton of gasoline onto the fire... about ten years worth of gasoline, if I were to guess.

So the clashes that were 10 years coming are happening today. Pretend like it's the unfunded liability crisis. Are we going to consult with the experts that saw it coming? No, let's pretend this thing starts and stops with one man. That an election (free from those evil Ruskies!) should free us.

So -- In May, the US said Canada will no longer be exempt from steel and aluminum tariffs. Trudeau called that "totally unacceptable," and retaliated with Canada's own tariffs, equalling $16.6 billion.

But Trump did bring up a couple good points -- Canada's supply management on dairy is an anti-free trade, protectionist policy that ultimately harms everyone in the long-run (sorry, Canadian dairy farmers, y'all need to read Hazlitt).

As well, during the NAFTA talks, Canada has been putting emphasis on gender neutrality and other postmodern nonsense instead of real constructive talks on trade.

If only Harper was still in power. Granted, I'm still a libertarian (really more of a classical liberal these days, but I digress), but Harper was clearly the lesser evil. He had a masters in economics (his thesis criticized Keynesian economics). He wasn't well-liked which boded well for voters who have a habit of deciding leaders based on whether they'd have a beer with them instead of anything pertaining to their policy and worldview.

Nevertheless, by June things has escalated. And mostly over Twitter.

Trudeau said he was "disappointed" asking (rhetorically?) "in what universe" could a long-time ally like Canada be considered a national security threat.

Indeed, I find Trudeau's domestic policies more threatening to Canada's national security than America's, but I don't think that was the point.

What is the point? There isn't. This is commentary on a news cycle. Now you see why I neglected this blog for a few years. It get's frustrating. Oh, trade and tariffs? I already figured that out in a blog post from 2011. How could that still be an issue? I already solved it. The books I used are still in print. They're still relevant.

At least with Trump, it's less about the issues and more about his personality. Over Twitter he attacked Trudeau for "being so indignant" on US-Canada relations while ignoring our tariffs on dairy which he says are "killing" American agriculture.

Of course, the USA has done plenty on its own to destroy their agricultural industry, but, sure, let's blame Canada.

Fucking Trump. He's generating sympathy for Trudeau at a time when Trudeau has been fucking up royally.

Trump is generating sympathy for Trudeau.

Trump campaigned on how the Fed was creating a bubble, but then took credit for the "great" economy and booming stock market once in power

Trump's mind isn't controlled by the DC establishment which is a nice refresher and polar opposite of his old opponent...what was her name again? Billary Hilton?

But Trump's mind isn't in tip-top shape and he's certainly not bound by principles or convictions. Other than tariffs, of course. On that, his mind won't be changed.

If only he were more concerned with the central bank.

OK - somehow this all comes back to North Korea. But let's drop that for a second. Let's examine what Republican Senator John McCain tweeted in response to all this bullshit.


To our allies: bipartisan majorities of Americans remain pro-free trade, pro-globalization & supportive of alliances based on 70 years of shared values. Americans stand with you, even if our president doesn’t.
— John McCain (@SenJohnMcCain) June 10, 2018

Sounds reasonable, eh? But it is precisely these "70 years of shared values" that prompted a Trump presidency. Let's not pretend like this is a one-time anomaly. The establishment will do everything in its power to prevent another Trump figure from occupying the White House, but the resentment is still there.

When McCain tweets about remaining pro-free trade and pro-globalization, he doesn't mean it in the classical liberal sense. To guys like McCain, the current state of Western liberal democracy (sans Trump) is ideal. We're essentially at the end of history.

Trump's election was proof that this fantasy only existed inside the heads of a small number of Americans. For many, having two parties neglect fundamental cultural and monetary issues have resulted in a Trump presidency.

This was a protest vote. A vote against the policies that have hollowed out America's industrial belt and awarded exclusive government contracts to top cronies and banks.

Not that Trump comes from outside that world, I still would have preferred Ron Paul as president.

But, I've said before and I'll say it once more - we have no one to blame but ourselves. Removing Trump isn't going to solve the long-term issues that put him into power.